The Fulbright Program  administers grants worldwide that promote mutual understanding and cultural exchange. Three Fulbright Korea English Teaching Assistants (ETAs)– Rebecca (Becky) Brower, Margaret Cleveland, and Robyn Kincaide– had the chance to travel to Thailand over their winter break and visit Fulbright Thailand ETA Sara Guido. They were able to gain a glimpse into her daily life by spending time at her school and touring local hot-spots while guided by her co-teachers. 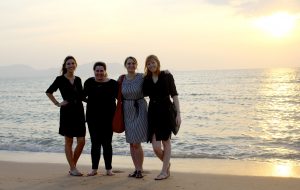 The engine sputtered to a stop, and the three of us internally sighed with relief, fearing that actually taking a deep breath would cause us to inhale even more oil smoke from the tuk-tuk’s tailpipe.

After leaving our Airbnb in Bangkok around 8:00 am, we had finally reached our destination just a little after noon. We were supposed to have arrived about an hour previously, but as we had learned, “Thai time” was quite different from the punctuality of Korean culture. At Korean bus stations, the bus left at its designated time, no exceptions– save the driver who decided to 출발 (chulbal, the Korean word for “depart”) a minute or two early. In Thailand, however, vans at bus stations that were supposed to leave at 10:20 might not leave until 10:50, and may or may not drop you off at your final destination within the town. (Our van did not, hence the tuk-tuk ride).

As Fulbright ETAs in South Korea, we have had no shortage of amazing experiences in and out of our respective schools and towns. When we chose to spend part of our winter break in Thailand, we knew we wanted a chance to experience the country on a deeper level than by just the visiting the main tourist attractions (although we did go to quite a few of those as well). Becky, a Fulbridge Korea Country Representative, decided to take advantage of the website’s ETA map to contact several grantees placed in Thailand. She eventually connected with Sara Guido, a Fulbright ETA living and working in the small town of Bowin and arranged for us to visit her school and attend some of her classes.

Armed with Sara’s explicit instructions for finding our way to her rural placement, Google Maps, and the knowledge of approximately three words in the Thai language (“yes,” “no,” and the number “5”), we finally arrived at our destination. Wriggling our way out of the tiny tuk-tuk into which we were packed like sardines, we enthusiastically greeted Sara, our stomachs growling to let us know that lunchtime was passing us by. As she walked us to her school, we were greeted by dozens of bright smiles and giggles from students thrilled to welcome their three new foreign guests. It was not hard to imagine that we may have been some of the only foreigners they had ever seen outside of the English teachers assigned to their school.

We made a short side-trip off campus to grab a quick lunch, then hurried back to the school for Sara’s afternoon classes. The three of us found ourselves in awe of her ability to manage classes of over 40 students (some 3rd grade, some 4th grade), which were not only much larger than our classes back in Korea, but also offered her far less opportunity to use technology and other resources. Somehow, she was able to keep all of her students occupied and learning English with only a few animal flashcards. It made us truly appreciate the emphasis on learning English in Korea, and subsequent funding that is put into educational programs. The Thai students, however, did not seem at all fazed by the lack of fancy PowerPoint presentations or worksheets. Their enthusiasm for learning English was clearly shown as their little arms shot up to proudly state, “I have an elephant. Who has a wolf?” (Or maybe they were just trying to show off for their American guests.) 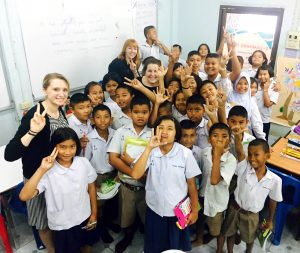 We quickly realized that even though these students may speak a different language, wear different clothes, and live in a different climate, they are really not that much different than our own students back in Korea. They have the same sweet smiles and shy waves. They are simply students eager to learn and just like our Korean students, love throwing up a peace sign in a selfie.

After helping with two energetic classes, Sara took the three of us around to see more of the school and meet students from other grades. While for the most part the middle schoolers from the adjacent building held back from much interaction with the new foreigners, uttering only a few shy “hellos,” we were swarmed by elementary schoolers. The girls were especially enthusiastic about approaching to plaster us with stickers, lending some brightness to our otherwise sober black-and-white clothing, donned to comply with the year-long requirement for Thai public school teachers to dress in mourning for the recently deceased king. 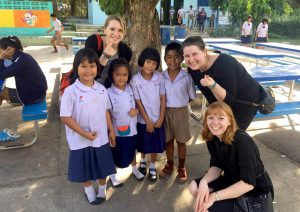 As the students began to make their way home after school, one of Sara’s co-teachers, P’Nui, graciously offered to show us around the area. We first headed to Khao Chi Chan, a mountain with a giant golden Buddha painted on the side. The statue’s massive size was by itself impressive, but it was also surrounded by beautiful gardens. As we made our way closer to the mountain, we were surrounded by a large Korean tour group and for a moment we felt almost as if we were back in Korea. Though our Korean language abilities are still lacking in many ways, after struggling to communicate across the English-Thai language barrier it was a relief to recognize several words and phrases. When an 아줌마 (ahjumma, term for a woman who is middle-aged or older) unwittingly walked through one of our group pictures and her family shouted apologies on her behalf, it was strangely empowering to be able to call back “괜찮아요! (gwenchanayo) It’s all right!” Following a photo-shoot that was perhaps somewhat longer than at first anticipated, we piled back into P’Nui’s car to head out to the destination for our evening meal.

We’re definitely not in Korea anymore, we thought as we settled down for a sunset dinner at the beach, recalling the below-freezing temperatures of rural Gyeongsangbuk-do in January, and somewhat dreading our return to such weather. However, some things proved to be the same: the shocking friendliness and generosity of the people; their enthusiasm to share their culture with foreigners who display a genuine interest in understanding it; and perhaps the most important thing to remember when traveling: locals always know the best things to eat. Korean food will always have a special place in our hearts, but Thai dishes could give it a run for its money. Coconut-milk based soups, spicy curries, grilled meats and vegetables quickly made the list of foods we knew we would want to have again.
Although we were all tired from our long and certainly not uncomplicated trek across the surrounding areas of Bowin, we talked with Sara and her co-teachers late into the evening, well past the point when the last vestiges of sunlight had faded from the western sky. Comparing the cultures and educational systems of Thailand, South Korea, and the United States (and swapping funny classroom stories) created a fascinating dinner conversation, and the opportunity to have such a chat was unlikely to arise in the near future. Eventually, however, our yawns got the best of us and we had to head off for the evening in order to catch a bus back to Bangkok. Despite the drowsiness, we still managed to find the mental capacity needed to negotiate a fair taxi fare back to our Airbnb after returning to Thailand’s capital city once more.

Rebecca Brower is a 2015-2017 ETA at Uiseong Elementary School in Gyeonsangbuk-do, South Korea. She graduated from SUNY Cobleskill in 2014.

Margaret Cleveland is a 2015-2017 ETA at Seoul Yonggang Elementary School in Seoul, South Korea. She graduated from the University of Missouri in 2015.

Robyn Kincaide is a 2016-2017 ETA at Uiseong Boys Middle School in Gyeongsangbuk-do, South Korea. She graduated from Saint Ambrose University in 2016.